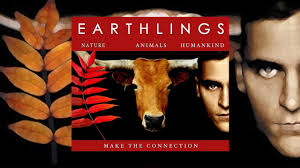 If slaughter houses had glass walls, wouldn’t we all be vegetarian.

But slaughter houses do not have glass walls.

They are not designed for us to be able to look in and see what’s going on..

They are designed to conceal from us the inhumane practices that are being inflicted on animals behind the scenes.

This is just one of the many messages that this incredibly powerful documentary, ‘Earthlings’ is trying to get across.

I will warn you now that it is not for  the faint heart-ed.

It is filled with graphic footage of animals being bled, jumped on,  hung upside down, stabbed, skinned, boiled and essentially slaughtered alive.

There is no doubt, that when confronted with the awful truth of the myriad of ways in which animals are used and abused for human benefit, including entertainment via such avenues as horse racing, outfits such as sea world and the well documented training practices of circuses, it becomes almost impossible to view any of these things in the same light ever again.

Even though at times, the images on the screen made me feel sick to my stomach and quite literally forced me to cover my eyes so that I may not see the cruelty occurring before me,  the truth is, I am a more informed person for having seen it.

This documentary highlights yet another simple truth.

That what we see on the packaging of meat, poultry and dairy products are little more than blatant lies and yet, we already know this.

And knowing this makes us complicit in the process.

So complicit that we no longer even wish to think about, let alone see the acts that our silent complicity have created.

Yet it’s our complicity that also serves to make this topic such a highly sensitive and complex one.

No one wants to talk about it.

And that’s good if your one of the few actually making bucket loads of money out of it.

But it’s incredibly bad if you’re the one whose going to end up living in an increasingly over polluted and unsanitary  environment due to the overcrowding and improper disposal of animal feces into our rivers, the overuse of antibiotics in animals making them less effective in humans and the waste created by toxins used to tan leather and other animal hides.

Not to mention the fact that it is especially bad if you’re animal.

Every choice you make when it comes to consumerism is exactly that.

You can choose to buy products that are made from animals, but be aware that in doing so  you are also willingly  buying into an industry that makes its profits by either killing or treating animals with extreme cruelty.

And how do you know if the producers you are buying from are indeed committing acts of cruelty towards animals?

Well, the only way to know what’s going on within the industries that profit from animal products, is to watch what they are doing.

.So challenge yourself to step out of your own comfort zone of ignorance is bliss when it comes to the practices that are occurring within the industries, (and they are industries), that produce your food, your clothing, your entertainment and actually watch what they are doing, after you do then ask yourself;

Are these really the industries and the practices that you want to support.

This is exactly what Shaun Monson, the brains behind this entire documentary, wants you to do.

He also wants to make everyone aware that during the Bush administration, they passed a bill called ‘Animal Enterprise Terrorism Act’, which is now a law that makes it not only illegal for documentaries like these to be made, but also for protesters against animal cruelty to protest.

The law states that”

If protests, consumer boycotts, whistle blowing or even media campaigns, cause any animal enterprise a loss of profit, then the activists, protesters or even film makers, can be imprisoned..

The message here is pretty clear.

It’s illegal to protest or draw attention to the cruelty occurring within these industries because industry people pay the government top dollar to make it so.

It’s all about profit and the truth be damned.

People must not be able to see what’s going on behind the scenes in these multi-million dollar industries.

To make this point even clearer, Monson also states that due to the fact that most television networks/stations are sponsored by industries that in one or another profit off either the slaughter or the byproducts  of animals (milk, cheese, clothing), he could not find anyone to  air his documentary.

The only line of defense we have in the “war on domestic animal terrorism” is the truth.

Be brave enough to watch this documentary and others like it and tell me what you think.

2 thoughts on “‘Earthlings’ – A documentary not for the faint hearted”

Let me know what you think.... Cancel reply